I was thinking today. About life.

And what the world would be like if such simple commodities had been invaded.

Here is what I think the belovéd morning talk-show, Live with Regis and Kelly, would be like with ninjas. Not Kathy Lee, but Kelly Ripa. She's much happier than Kathy Lee ever was.

The hosts would be transformed, as such:

But, of course, you wouldn't be able to see them, as is the ninja way, or else they would be forced to perform seppuku, where the ninja jabs him or herself with his or her sword in the stomach and twists the sword to the left for a slow and painful death. And wouldn't that be good for the kiddies?

A normal episode would proceed as thus:

Look! It's Orlando Bloom! However, what Orlando doesn't know (well, that's quite a bit that he doesn't know, but let's pretend he knows everything but the following statement) is that Regis and Kelly are both, gasp, NINJAS! (dramatic reverb) Can you see Regis and Kelly in the above picture? Scroll down to see if you're right.

FILLER TEXT SO I DON'T WASTE WORD SPACE!!!! LALALALA!!! I HAVE RED PAINT ON MY TOES BECAUSE I PAINTED MY FRIEND'S HOUSE RED WHITE AND BLUE AND FELT LIKE IT WAS REMINISCENT OF SOMETHING FROM TOM SAWYER AND LALALA THAT'S A DIFFERENT ENTRY BECAUSE THIS ONE HAS BEEN INSANELY DEVOTED TO NINJAS AND LALALA I HAVE NO IDEA WHY BECAUSE I DON'T EVEN LIKE NINJAS ALL THAT MUCH AND LALALA THERE ARE SOME PEOPLE THAT ARE OBSESSED WITH NINJAS BECAUSE LALALA THEY LOVE ANIME AND I QUITE HATE IT AND LALALA ALL THINGS PERTAINING TO IT AND SUCH AND LALALA I'M KIND OF TIRED BECAUSE I KEPT HAVING NIGHTMARES THAT SPIDERS WERE IN MY BED AND NOW (yes now) MY LEGS ARE ACTUALLY COVERED IN SPIDER BITES AND I'M WONDERING IF IT WASN'T A DREAM AT ALL, OR IF IT WAS REAL BECAUSE I HAVE A LARGE CASE OF ARACHNIPHOBIA AND NOW I DON'T THINK I CAN EVER SLEEP IN MY OWN BED AGAIN AND LALALA I REALLY NEED MIDOL LALALA THIS IS STILL FILLER TEXT SO YOU HAVE TO KEEP SCROLLING DOWN TO FIND THE ANSWER AND TODAY'S TITLE IS FROM ZOOLANDER WHICH IS AN OKAY MOVIE BUT IT'S KINDA STRANGE SO IT'S FUNNY IN A BEN STILLER SORTA WAY AND LALALA AM I ANNOYING YOU YET? KEEP ON SCROLLING DOWN SO YOU CAN FIND OUT WHERE REGIS AND KELLY ARE....................

Did you find them? Well, here's the answer: 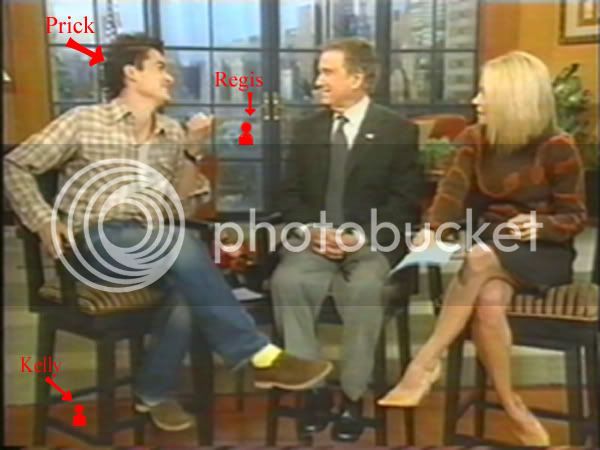 There are two dummies in the shot (Orlando Bloom is a different kind of dummy, silly!).


Credits
Layout was made by Emerald Ice for use at Frozen Ice.
Image credit goes to Squaresoft.